skip to main | skip to sidebar

Elliott & Cathy Masie are heading to Mali, Africa, on their Learning Gives Back! Project. Organized by Malaria No More, this mission will be part of an international distribution of more than 2 Million Mosquito Nets and other health projects.

This project was triggered at Learning 2007, with the help of Melinda Doolittle and over 2,000 learning professionals.

One Laptop Per Child??? Africa Implications 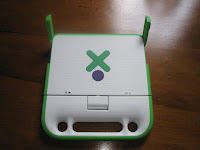 While in Africa, this very strange looking machine arrived at The MASIE Center LAB. It was our early edition of MIT's One Laptop Per Child - XO Machine.

The timing was perfect, as the goal of this project is to put laptops for education and growth into the hands of children in the developing world. What is you could create a $100 computer, that didn't require expensive networks, operated in tough environments and was part of a collaborative open source learning experiment.

Tom King, one of our MASIE Learning Fellows, will provide a much more in-depth review. But, here are some of my early observations after 15 hours of use/testing:

Here is video that Tom King pointed us to from Yves Behar, the designer of the machine. It gives a great perspective on the project:

Learning Makes All The Difference! 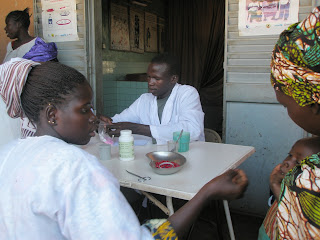 One significant impression from our trip to Africa is the role that Learning and Training play in making a difference in Africa.

Each of the development projects that we visited, from health care to micro-loans, to AIDS prevention to economic development had one key success factor:

All the economic assistance in the world will not make a significant difference without good learning and teaching.

While I know the topic of learning was raised often, due to the work that I do, it hit a deep resonant chord in every conversation. Teaching people the skills, information and context they need to survive and then hopefully, thrive, in this environment is totally based on access to good learning.

And, learning here is not about technology. It is about the basics of how people learn. Access to expertise, structures for practice, feedback on performance and support for transfer to the work/living place. 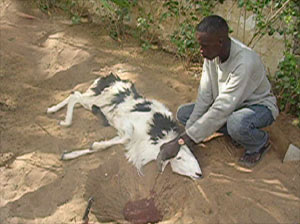 It is 7 am in Dakar, Senegal on the morning of the Festival of Tabaski. This is considered to be one of the biggest Muslim Festivals of the year - The Feast of the Sacrifice.

According to the Qur'an, Allah asked Abraham to sacrifice his only son. Though Abraham was deeply troubled by Allah's request, he agreed to perform the sacrifice as a sign of his obedience. But just before Abraham began the sacrifice, Allah told him to offer a sheep instead.

To remember Abraham's offering, every family sacrifices a sheep on Tabaski morning. The rest of the day is spent in prayer and celebration. Everyone wears new clothes. Parents give their children presents and money. People feast on roast sheep and share the meat with others. They visit family and friends, and give thanks to Allah.

For the past few days, the streets and markets have been filled with sheep for sale. Even the poorest of families will try to raise the money for a sheep or at least share one in a smaller village. 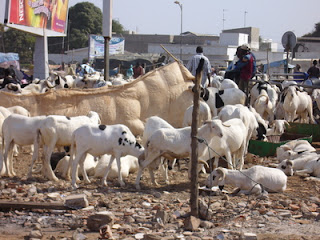 There is great excitement in the air because of Tabaski. We can feel the importance of the Festival. Interestingly, the actual day of Tabaski , which is based on the lunar calendar, isn't known for certain ahead of time. The imans at the mosque watch the movements of the moon and announce it at the mosques and also on the television and internet just a few days or even hours before the Festival begins.

To read a detailed account of the holiday of Tabaski: http://en.wikipedia.org/wiki/Tabaski

We visited, with CARE Mali, a group of Health Relay volunteers - on the ground trainers from the villages. Here is a 5 minute video, with their views as well as an impromtu "train the trainer" lesson in the field:

Mobile Phones in Africa - Quite Different

The mobile phone in Africa is quite different and rapidly changing some cultural and economic aspects. The growth of mobile phones has been the largest in the "developing world" with a massive surge in Africa.

First of all, a new phone costs about $50 and a used one can be found for as little as $10. Instead of a monthly bill, requiring a credit account which is impossible here, people buy Scratch Off cards from street vendors for amounts as little as $1. They enter the code and amount is placed on their accounts. And, it is free to receive calls and quite cheap to make one or to send a text message.

There is significant innovation for how the mobile phone is used. Day laborers will get a message telling them where there is work that morning. There is a grow

ing use of a the mobile phone as a banking process and some systems allow someone to transfer a "micro transaction" from one phone to another. And, the mobile call can keep together a family that has been forced to disperse to various parts of a country due to economics or conflicts.

The mobile phone culture extends to communities without electricity or running water. People can drop their phone off in a vendor to get it recharged from a car battery for a few cents.

There are also some very interesting uses of mobile phones to keep track of patients are using AIDS medicine with daily reminders to take their pills at key times.

Here is an interesting article about Mobile Phones in Africa from MIT: http://prom.mit.edu/whyafrica.html

Here are two videos from Mali.

1) Montage of video and images from our trip to Mali.

A Photo - Sunset on the Niger - Mali, Africa 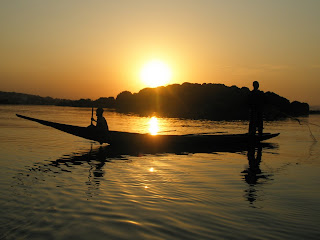 I have posted video and photos from our 5 days in Mali, as part of the Malaria No More mission, yet it is difficult to convey the impressions, emotions and learnings that are swirling around inside of me this evening. So, I'll share a few phrases and stories:

Thanks for listening. We would love to get your emails while we are here.. just send a note to emasie@masie.com

Here is a 3 1/2 minute video from Elliott Masie from the clinics in the villages of Mali. It includes a "thank you" from the children of Mali to the people who donated the Malaria Nets.

Video from Malaria Net Distribution in the Field

Here is a short video with some short clips from our first day in the field here in Mali, Africa